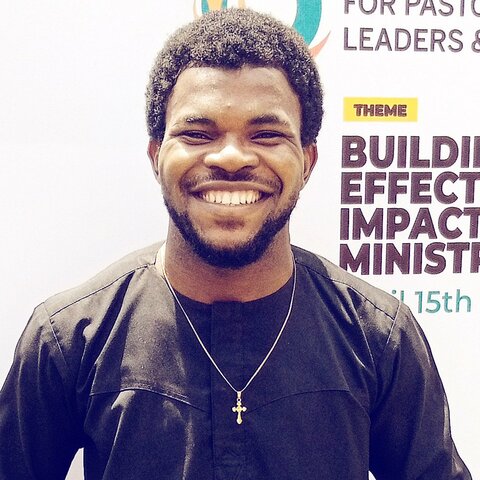 you need to act from your innermost being — from your
heart — your spirit. Jesus said, "... _whosoever shall say . ..
and shall not doubt in his heart, but shall believe that those
things which he saith shall come to pass; he shall have what soever he saith"_ (Mark 11:23).

I was preaching that same year in Port Arthur, Texas, and
the services were good, and there were many healings. A
Methodist woman came to the meetings, and thanked me for
the lessons we had been having.

She told me that she had been
sick for twenty years and had not been able to do her work.
She could not even get up and fix breakfast for her husband.

She was in her forties and had two grown daughters. The doctors had not been able to help her.

Some time later I received a letter from this same woman
with an offering enclosed, for she said that she wanted to have
a part in helping someone else as she had been helped. She said
that she had not known the importance of the Word of God and
the Name of Jesus.

In the privacy of her own home she had
looked up the Scriptures, raised her Bible and said, "Satan, you
who have bound my body for all these years, I break your power
over my life and claim my deliverance and my healing."

She
added that for the first time in twenty years she was doing all
of her own housework. Six months had passed, and she was still
healed.

She said that she had the vigor and vitality of a
teenager, and that she had not felt so good since she was six teen.
Then she told me about her husband who had never been
saved. He would not go to church with her, although he was
a good husband.

This woman took the Bible and in her own
home she said, "In the Name of Jesus I break the power of the
devil over my husband and claim his salvation." She said that
it worked like magic. Overnight, he became a new creature. She
said that they were the happiest they had ever been in their
lifetime.

She told about her daughters who smoked and danced. She
said that she lifted her hands to heaven again and broke the devil's power over them, claiming their salvation. Within ten
days, they became new creatures. They were delivered from
every habit that had bound them, and heaven became their
home.

When we will learn to pray in line with what the Word of
God says, our prayers will be effective!