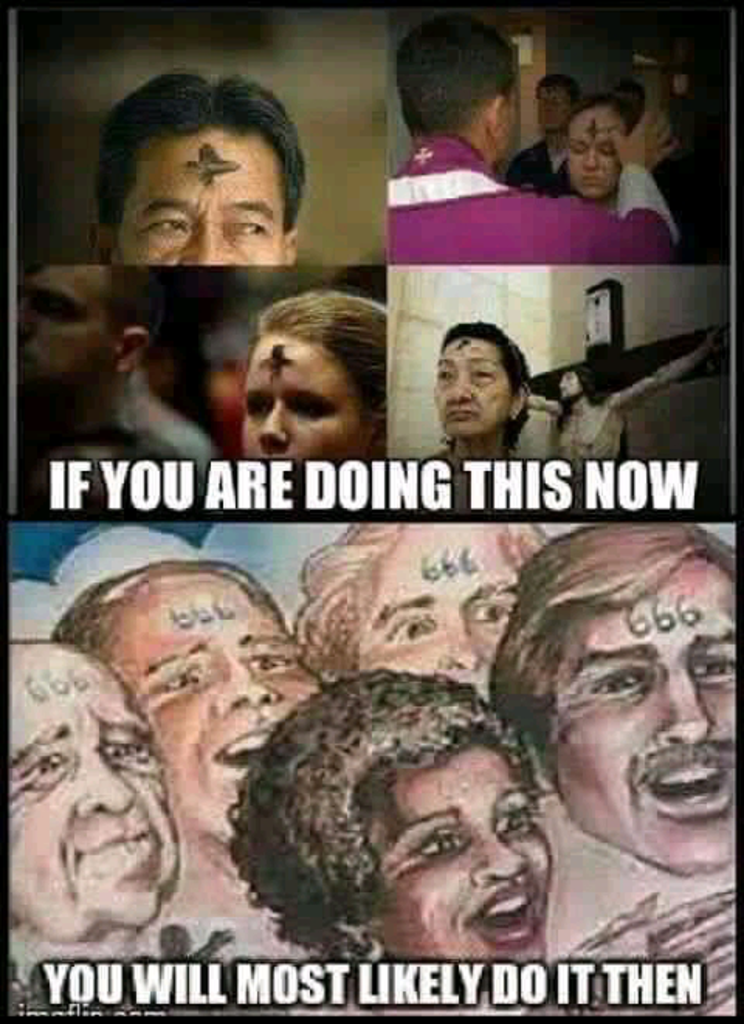 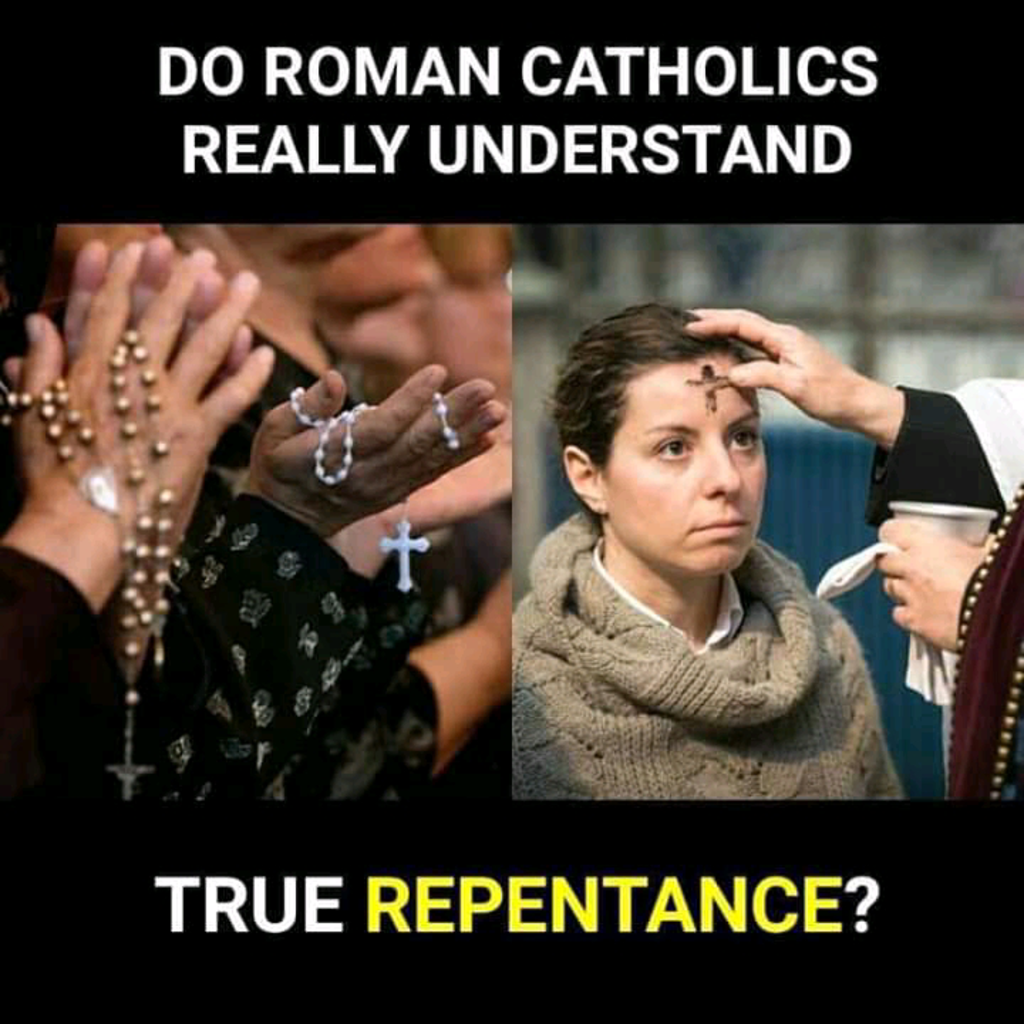 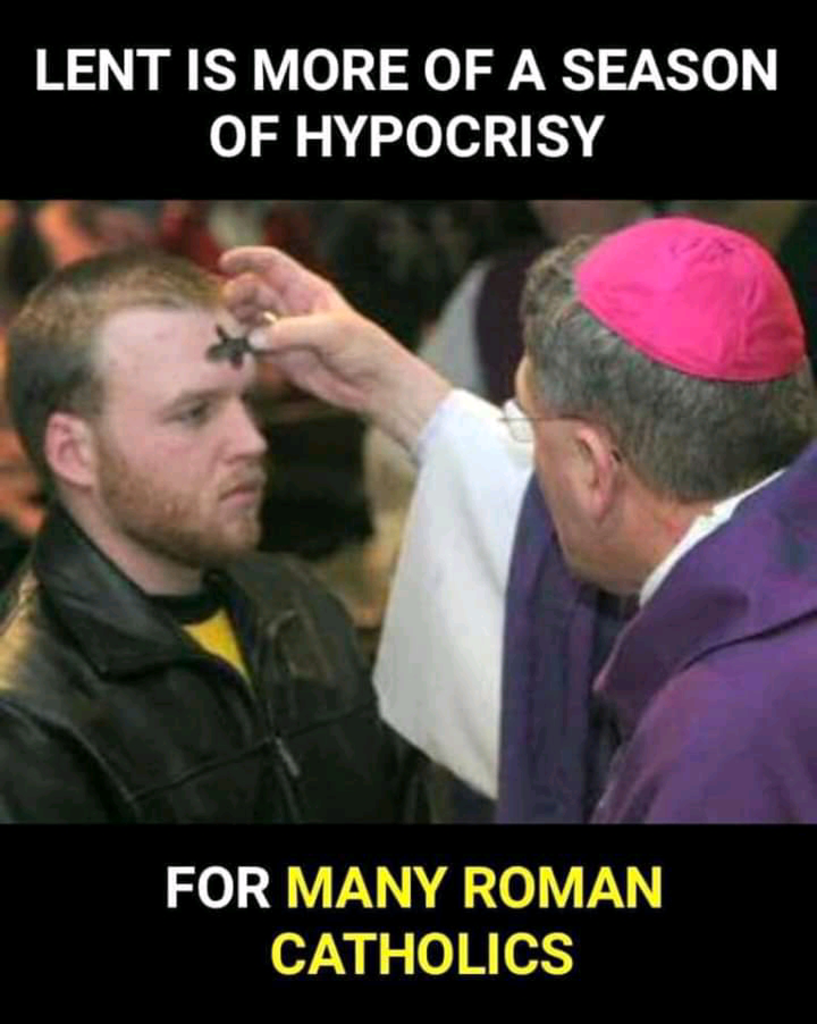 The problem of Ash Wednesday for Roman Catholics is that they think the priest absolves their sins in the process.

I remembered how I openly opposed Ash Wednesday not only by refusing to receive the mark but also eating meat on that day in a public area. I celebrated the liberty I had in Christ. I can do anything I please as long as I do not indulge in sin and vice (which I can no longer do because God's grace equips men unto good works). The liberty of Christ grants me the freedom not to be bound to the silly traditions of men and do good works because of my new desires.

I have noticed more often times than not is how many people use Lent as show business. More of them than not. I have seen how Roman Catholicism has used Lent as a season for hypocrisy. I have observed how a mean person can then pretend to have changed during Lent. They pretend to turn a new leaf.

You can see them prayerful during the Lenten season. They will do acts of kindness for all to see. By following the burden of mandatory abstinence of meat, they try to impress everyone of how "godly" they are. They say that their sins were washed out by the Ash Mark. Yet some of them show how degenerate they are even on that day.

How is Ash Wednesday also show business? Like Ahab's sackcloth and ashes, it's for all to see as an act, not as a result of inward repentance. The cross mark made from ash might be their way of telling everyone, "Look, I'm fasting." The Bible does not tell of when to fast, man chooses when to fast as a spiritual discipline.
The Bible also commands this for fasting in Matthew 6:16 not to make it a huge public deal when you are fasting. That is, don't announce it when you are fasting unless somebody invites you for an eat out.
Many try to look penitent just so to get the praises of men. I guess that's what they only care about considering Roman Catholicism is very focused on manmade tradition against basing their traditions on the Scripture alone.

As a former Roman Catholic, nothing really surprises me when it comes to the hypocrisy a lot of people have during Lent. Whenever it's Lent, it's time to do good. However when Lent is over, they all return back to their sins and vices.

Repentance of sin is not just on Lent or any Roman Catholic ordained feast day, rather it is a DAILY PROCESS.

There is no "mortal sin" and "venial" sin either as when you break even one of God's laws, you break them all (Romans 3:23, James 2:10-11).
The experience was just similar to how Martin Luther was told not to return to the confessional until he committed a bigger sin. All these led Luther to realize that even the minutest of sins was highly offensive to a holy and righteous God.

This also differentiates a good work from a dead work.
A Roman Catholic apologist once said, "Well atheists also do good works."
It's good works from the human perspective but it is not good.

A preacher once said—“It is not enough to do the correct thing, it must be done in a right spirit, and with a pure motive. A good action is not wholly good unless it be done for the glory of God, and because of the greatness and goodness of his holy name."

They do these acts of goodness but they are dead works. Why do I say it is dead works? Because their motive is not pure, it is only out of trying to bribe God to accept them, it is based on self-merit and in the reality, not for God's glory.
Meanwhile, the Christian's good works are the necessary fruit not root of salvation. That is, Christians do good works not as a burden but as a delight because they want to please God (Titus 2:11-14). 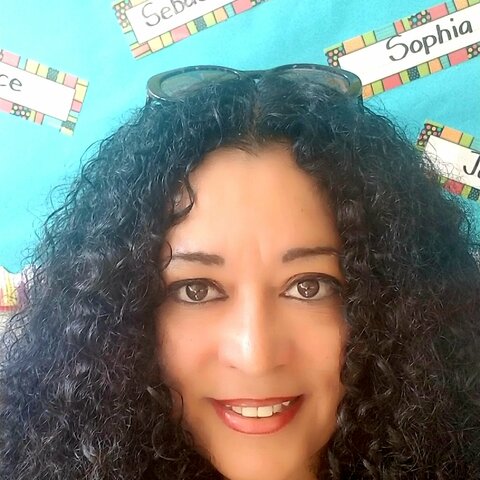 @Suzanne Krauss it's simple they just have to be born again and accept Christ as the Messiah same goes to Muslims and Buddhists..the virgin Mary as they say is the mediator of God and men is a lie from the pits of Hell..it is not seeing the people in a wrong way..they are just in the wrong doctrine..Roman Catholicism is Baal Worship it has been their from the ages..my sister pray for your family members to accept the Lordship of Jesus Christ you yourself are their only hope teach them the truth of the Gospel..who is Jesus the only way to Heaven...

@Lalimbo I watched it..the falling away is coming.. 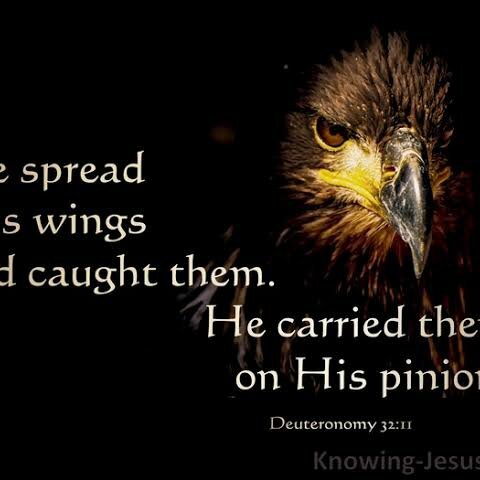 You should watch Ian Ndlovu prophecy on the shaking that will happen to the Catholics. It might help us harvest souls among the Catholics. 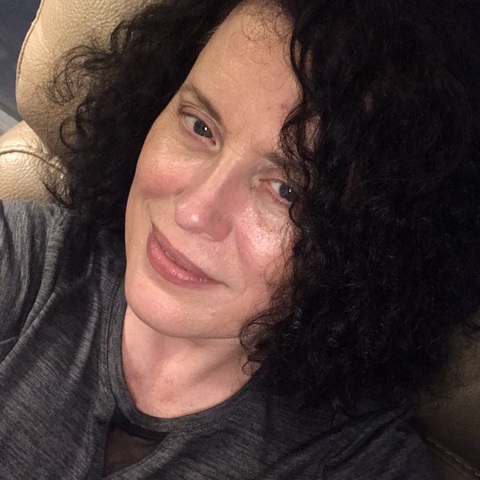 You might want to start with discussion about how to be in right standing with God now. And about being born again happens here on the planet. Many Catholics love God greatly. They have not been able to talk openly about it because of the hatred that they have endured.
People typically see Catholics through a critical view but if you remember that they are people and be kind full of mercy and grace. Some belong to God and some will not choose Him. Just like everywhere else. People there are hungry for God and the Holy Spirit.
Before anyone throughs the baby out in the bath water remember who has fought ardently for the unborn. Praying for reformation in the Catholic Church. My family is old Catholic from Czechoslovakia but I got born again 35 years ago. Since then half of the family is sa

@carolineroberts7 it is very tough to witness to catholics it is not easy at all..but you still have to give it a go if they are receptive..

I have a burden for my friends in the Catholic faith...I am asking God for wisdom on how to witness to them.